A new exhibition at the BE＊hive on the current theme of “Refugees and Displaced People in the World” is on display, beginning from Monday May 7, 2018!

Both Syria and Yemen have a long and rich history where civilizations have flourished over time due to their location as a transit trade point via the Red Sea.   Through this exhibition, we hope you can come to understand the ongoing conflict that has impacted these once peaceful countries.

The exhibition will include a section introducing “Refugees and Displaced People in the World.”

In B corner,  we present a short documentary movie produced by the Japan Conflict Prevention Center (JCCP).   It is based on 4 women living in Mersin city,  Turkey,  focusing on their hardships as they are forced to flee their city and become refugees.   Please think about the women in this movie and reflect on your life. 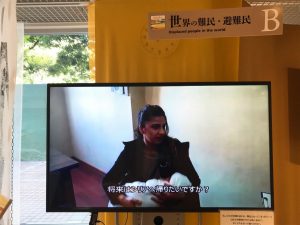 Next is a set of photographs depicting the current situation of refugees  displaced in the world.

Each picture is accompanied by a comment telling you the current situation. 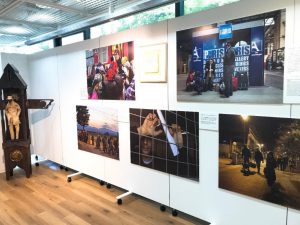 The final section renewed in this new exhibit includes decorative items, figurines, and books from the region of the Middle East. 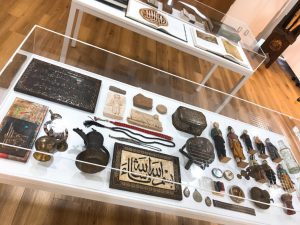 Next time we will introduce corner C which focuses on Syrian refugees and displaced people.