We exhibit various art works by a great number of artists under the theme of “refugees / displaced people”. Each one is ingenious, and by feeling the message of the artist in the work, it can spark your own curiosity and imagination. Continuing from last time, we will introduce more works. 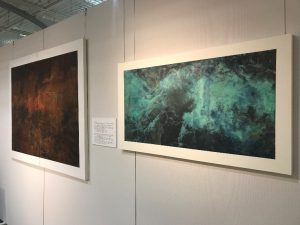 The Great East Japan Earthquake and Tsunami awakened our reality to the power of nature.  Speaking of the Great Flood, it is reminiscent of the Great Flood of Noah in the Old Testament. Leonardo da Vinci left behind a work of raging waters, but it seems that he was conscious of the flooding and the downfall of the world.
Through scientific observation of the flow of water in science, the earth is an organic body just like humans, and likewise, it is destined to die. It appears that the flow of water is like the flow of blood in the human body, and the large flood is thought to mean the eruption of blood, and thus the collapse of the human body.Water brings benefits but also brings fear. What was the perception of refugees as they were evacuated by boat?  How did they perceive water? Did they fear losing their identity in the vast ocean?

※This is a part of Mr. Akiyama’s work.

“Twisted” Masumi Tate
Even if yarn is spread carefully, there will be a moment when it breaks.
But it can be tied to another at the point where it breaks.
Sometimes different colors, even different materials create an interesting thread.

Are you bothered about knots?
When they gather together and form, they speak as if they are aware of themselves.
Humans are very similar with this. 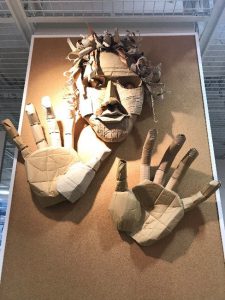 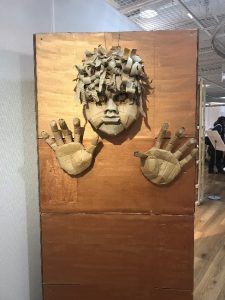 This expresses the painful situation of refugees. The wall presents the place they are about to leave.

They want you to grab their hands.

However, they still can’t find hands to grasp.

It is a face that fights anxiety, reaching out silently, asking for help.

We will introduce more art works next time. Please look forward to it!