We exhibit various art works by a great number of artists under the theme of “refugees / displaced people”. Each one is ingenious, and by feeling the message of the artist in the work, it can spark your own curiosity and imagination. Below, we will introduce new works that begin to display from this exhibition. 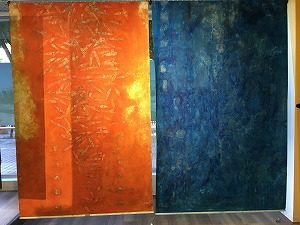 Eyes, eyes, eyes, everywhere. Monitoring eyes. Dead eyes.
Rotating eyes, staring eyes, various eyes bear power. While acquiring the energy of rotation, the eyes will live independently without somebody might help you.
Eyes exist, but in an unbelievable world.

Right: “It exists but no one sees it” by Tetsuo Yoshida

Humanity is the history of minority ethnic extinction.
It exists, but draws a fuzzy nation and wall.
Starvation is the greatest protest against the nation.
There are people who exist but cannot even wander.
As long as there is life and whirlpool, windows to the world are opened, but still many endangered species exist.
Ugliness to ignore the existence.
Cannot live without knowing it.

Noah’s Ark in the myth is said that Noah built a huge ark by God’s announcement and escaped difficulties with the animals in the flood.
This ark with many animals on deck has a figure like a modern aircraft carrier. What is different from the myth is not just its form but a flood rises from the inner side of the ark, and it spreads to the earth in a moment and carries the ark together. After the flood has drawn, the ark itself becomes the cornerstone of the earth, a new world begins.

Next time, we will introduce more new art works.