In this column, we will introduce several BE＊hive activities..
This time, we will introduce workshop focus on Rohingya Refugees.
On November 20, we held workshop “Think about Rohingya from media” at BE*hive, for students of the University of the Sacred Heart (facilitator: Yoko Ito / Staff of DEAR). 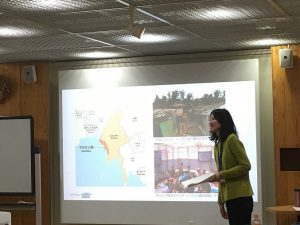 ●Ice break~ Refugee Quiz~
At first, students relaxed their head and body with the four-choice quiz about refugee problems and Rohingya refugee. As in the picture below, each answer of the quiz was at the corner of the space, so they had to move to the place of the answer. For the afternoon class, it was a good exercise for drowsiness. 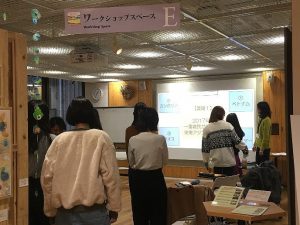 ●Let’s understand about Rohingya Refugee
The background of Rohingya refugees is a bit complicated. In order to know that, it is essential to understand various aspects of Rohingya, such as history of Rakhine State/ Myanmar, their religion, nationality law, etc. Therefore, after the facilitator briefly explained, students saw the exhibition of BE * hive and further deepened their understanding of Rohingya refugees. 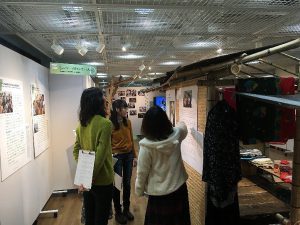 Mini workshop ~Comparing various opinions on Rohingya refugees ~
Next, we exchanged opinions about Rohingya refugees based on the articles in newspapers and comments on various press reports, etc. From several articles (opinion), students chose what they most sympathized with and what they could not accept. Then, they discussed in a group of 3 to 4 people.
Many students were surprised at others various opinions and enjoyed the difference. 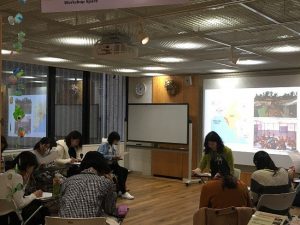 We introduce some voices from students below.

● I could understand various comments on Rohingya refugees from different angles. Even it is talked as a serious problem, there are parts that are other people’s affair. I really felt that the answer is not easy to bring out.
● I felt we should not think as somebody else’s problem. Before the workshop, I even didn’t know a word Rohingya. So I am glad to know this time. I really sympathized with one of the opinion that everyone in Myanmar is relying too much on Aung San Suu Kyi, but each and every one should think it as own matters.

Walking around exhibition hall ~Know the situation of world refugees~
Finally, students watched the exhibition of BE * hive in order to find out what kind of difficulties Rohingya refugees confront and what kind of life they are spending in refugee camps and in Japan. Through the exhibition, they could have concrete images of “people called refugees” that were hard to get in the newspaper articles. 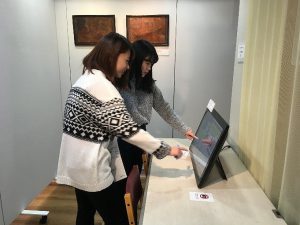 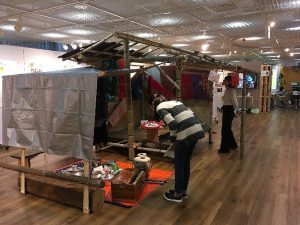 Below are some of the impressions from students.

●I am impressed with a word “Refugees living as a human being”
●Rather than thinking “Rohingya refugee” as a vague word, I felt very closer to them after looking at the pictures of each child in a refugee camp. Also, when I read comments on “Rohingya refugees” from various perspectives, I thought what kind of position I am.
.●I am impressed with “The Rohingya cannot even become refugees.” As Bangladesh government is not signatory to the Status of Refugees, Rohingya is not accepted as refugees. Bangladesh government are accepting them as temporarily residing foreigners. Rohingya are deprived of freedom as a human being.

Various workshops are held at BE * hive from the perspective of “knowing, thinking and acting”. For details, please see the following.